This morning, we were woken up by the arrival of James having already caught a train from Oslo and run the 5km from the station. With some reluctance we got up and some time later (without the promised porridge as this was still on a plane) took the scenic route to the day's training area.

James had planned some excellent training on Skaran, nice and runnable with some good contour detail in places. The exercises were designed to focus on compass work, but afforded the opportunity to navigate using the plethora of features. The forest was particularly alive, with mosquitoes and insects forcing you to keep moving (so mistakes requiring relocation by standing still were doubly punished!), but also the giant crawling ant hills. 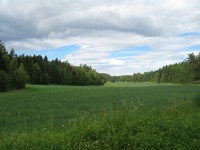 We set off from the training to go swimming on the way back, though the expected lake was rather too solid, green and bushy for pleasant bathing! Instead we trekked a further 1km along the main road and found the Promised Waters (with a semi-suitable jumping spot). Dan proclaimed that the lake was in fact the sea as "it was salty", until he realised this was just the sweat on his fingers. Matthew was enticed into the water by a race between kommunes - we got out with rather cleaner o-kit and the walk back provided ample opportunity for it to dry.

In the evening, there was an 80% success rate at getting to the OK Moss training, where we had a good fight with the local forest. Dan blames his loss to John & James on stopping to admire the view, though no one managed to break the 1 hour mark. The evening was spoilt by having to carry giant briquettes of predominantly useless plastic, however they ran out at registration so some members were spared the emit-esque ordeal.

We had fun taking the many variants of the tour photo before the sun went down after enjoying another al fresco meal of pure energy gloop, which was once risotto but still tasted good. Dan volunteered to be the washing up machine, and wants to become the "CUOC recycling officer", though realised this was unlikely to be realised as he would need to wait until the AGM, or find another 14 members to call an EGM!

Dan enjoyed a private sauna with his pet tick though they separated soon after... It is finally starting to get dark, so Fiona has gone to fix the makeshift curtains (gaffa tape to the rescue!).