Whilst some still had exams, 8 intrepid CUOC members descended upon Cambridge station at the unearthly hour of 5am (5:10am for someâ€¦). After arriving at the airport and faffing with the location of custard powder (and other food items) within our baggage, we finally checked in a bag less than 100g under the weight limit. At security Matthew had to explain SportIdent kit to the guard at least 3 times before he finally understood that it really was harmless. We were disappointed with the location of our gate as we denied the pleasure of using the monorail. 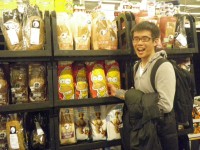 We declined the opportunity to purchase Priority boarding (whilst thinking of the Come Fly With Me sketch) as we couldn't see the point now Ryanair allocate seats. We were slightly disappointed that had not been allocated seats together, but this transpired not to be an issue as the flight was only 2/3rds full, and we had the last 11 rows all to ourselves, enabling certain people to gain a well-earned nap. Concerns about a hypothetical MicrO on the plane causing disruption to other passengers were therefore also unfounded, though we thought the cabin crew may not take kindly to us leaving boxes that flash and beep around the planeâ€¦ The space did however allow several â€œmusical chairsâ€ moments â€“ no-one landed in Rygge sitting in the same seat they took off from Stansted.

Dan was interrogated about his plans in Norway at the Norwegian border, whilst HQ was asked â€œwhich hotel are you staying in?â€ The quality of standard class accommodation on Norwegian trains was appreciated â€“ First Capital Connect take note! After speaking to the Guard in Danish, Fiona was told that it â€œis better to be a Dane in Norwayâ€. James decided that heâ€™d rather go and watch people running round a track for the evening, rather than enjoying the delights of prime Norwegian forest, though he will return tomorrow (hopefully!).

The supermarket trip threw up a number of exciting discoveries: 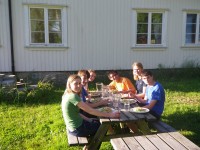 After finally getting into the correct hut, we downloaded an email over the hut Wifi asking when we would arriveâ€¦.! At one point we were considering the possibility of sleeping outside around a campfire, the weather would certainly allow for this!

We started our training with a fantastic Czech Relay, followed by a Control Pick with interesting cliffs near the controls, which is a promising start for a good week! After dining al fresco on tuna pasta bake and â€˜poisonedâ€™ apple crumble, we retired to the hut to get some well earned rest.