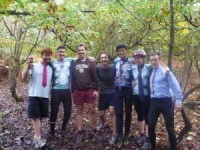 This weekend (12-13th November) seven CUOC members braved the joys of the X5 in order to compete in the SprintO. The race, usually hosted by Cambridge but this year hosted by Oxford for the first time, was held in Shotover Woods. The format was two Prologues (one for the women) of about 2km in the morning, followed by a closely run head-to-head final where competitors started in pairs spaced by 15 seconds. Each member of the pair would run three loops, starting on different ones but having the same final loop for maximum competition.

In the menâ€™s, Ben Windsor was the top from Cambridge in 4th place, 2:39 minutes behind winner Ralph Street from Sheffield. Oxford and JOK took the next few spots, followed by Mark Salmon, Andrey Poletayev, James Hoad taking consecutive 11th-15th places, with Terence Goldberg in 15th. Newcomer Chris Ostermeyer did well in his first ever orienteering race to finish 20th for Cambridge.

Despite Cambridge having one of its strongest ever womenâ€™s teams this year, for this race they only fielded a single competitor â€“ Andrea Å tefkovÃ¡ who finished in third place, 6:49 down on the winner Julia Blomquist. The 2011 SprintO was rounded off with the Elite AlcO. This was enjoyed by everybody, except for one unfortunate slip on some blÃ¡to resulting in a cut knee and trip to hospital.

Everybody then travelled back to Oxford City Centre for showers and a social including a meal in Exeter college. Sheffieldâ€™s cohort of one person was particularly enthusiastic.

CUOC stayed the night in Oxford and four of us travelled to a regional race near Woking the following day.