First of all I would like to thank Clare for organising, especially sorting out all the permissions, Ian Webb for producing a great map, and Mike Capper for controlling.

Planning the City Race turned out to be quite a complicated task, mainly due to the nightmare of sorting permissions. The courses went through several iterations as we gradually found out what areas we could get access to, and what gates we could get open. Over the summer we lost access to Queens’ College and one of the university sites, so Clare rushed to get permission from Downing College as a replacement, and I had to replan the middle of courses 1-4. The gate we were using into Pembroke College changed from the main Porters’ Lodge (hatched purple on the map) to the chapel gate, with the result that I didn’t notice the quickest route from 5-6 on course 1 – it was meant to be a route choice between going round the bottom and round the top. 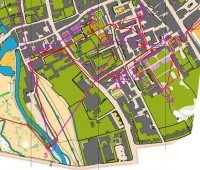 The week before the race, we lost access to Parkside School which meant I had to move 137, but this actually seems to have resulted in some nice route choice on course 2. 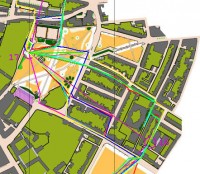 Luckily, everything came together on the day and it ran relatively smoothly.

Out of bounds areas were generally respected, but an interesting point which arose was the marking of trees on out of bounds college lawns. The trees are useful as a navigational aid, but some of them were mapped using white, so technically this suggests you can run through them.

Hatching all the white would make the map look messy, so maybe we should have marked these trees individually using green circles, or using the scattered trees symbol with olive green instead of yellow. Does anyone have any thoughts? It just remains for me to say good luck to whoever plans it next time.

I hope you all enjoyed your day in Cambridge - the weather was certainly better than it was on the original date in February. The success of this race was down to the hard work of Clare and Ben; CUOC is a small club and taking on a city race was a big proposition. That it went so well was due to the huge number of helpers that Clare managed to muster who manned controls, gates and made themselves available for whatever needed do on the day – some of these helpers were orienteers but some were not. My thanks to them all.

Ben worked really hard to make late amendments to the courses, following the late loss of Queen’s College due to a major catering function in the college on the revised date for the race. We were all very grateful to all of the colleges that allowed us to run through their grounds – a rare privilege in many cases and if it seemed like we over-egged the message about staying off the lawns it was vital to ensure that we could run there again in the future. Most runners seemed to comply, although some still seem to have a problem with the uncrossable boundary symbol on the map – it is there for a reason! Fortunately such incidents were relatively rare but obviously it is impossible to police these totally, so runners have to take responsibility for their own actions.

We tried to make sure that the course combined some challenging long legs as well as some more complicated control picking in the colleges – judging by discussions at the finish we seem to have succeeded! It will be interesting to see the routes on Routegadget. The controls in Jesus College seem to have been particularly appreciated – complex navigation after some fast long legs appear to have slowed a few people down.

I’m not sure what CUOC’s plans are for the next city race. I hope they run another one soon and I hope that it is at this time of the year. The race was so enjoyable from my point of view because runners hung around after they had finished to talk about their runs and a good number even stayed for the prize giving; I am not that this would have happened on a freezing day in February!

Cambridge has an efficient Park and Ride system with frequent buses from all sides of the city. Click here for more info. Jesus Green is less than ten minutes walk from the central bus station.

Cambridge is well connected by train to London. The train station is 20 minutes walk or a short bus ride from Jesus Green.

If you're coming from further afield, then Stansted airport is only a short train ride away.